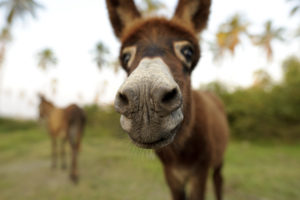 In Numbers 22 yesterday, we were introduced to the Moabite King named Balak.  He was afraid.  Knowing what the Israelites had just finished doing to the Amorites, King Balak and his people were distressed as they looked out and saw thousands of Israelites camped on the plains of Moab.  As any good leader would do, Balak took action.  He sent for Balaam, a “diviner” with an impressive track record, to help him take care of the situation.  “Come now, curse this people for me, since they are too mighty for me. Perhaps I shall be able to defeat them and drive them from the land, for I know that whom you bless is blessed, and he whom you curse is cursed” (Numbers 22:6).

I find it interesting that Balaam is not a prophet of God. He is a diviner or sorcerer.  However, God still steps in and provides Balaam instruction.  God tells him not to go with the Moabite princes and not to curse the Israelites because they were God’s chosen people.  Balaam desperately wanted the riches and honor King Balak had promised him.  So he persisted with God, hoping to change God’s mind.  Surprisingly, God compromised and let Balaam go. And God came to Balaam at night and said to him, “If the men have come to call you, rise, go with them; but only do what I tell you” (Numbers 22:20).  So far so good, Balaam was getting what he wanted (or at least he thought so)!  Here is where it started to get crazy…

Balaam set out on a donkey, but God sent angels to block the way. Balaam was frustrated and beat the donkey because it wasn’t going where he wanted it to go.  THEN, God opened the donkey’s mouth and he started talking to Balaam!  (What, a talking donkey?  This sounds like a bad television show.)  After the donkey made Balaam feel bad for the beating, God opened Balaam’s eyes to see an angel of God standing in the donkey’s way.  Balaam fell on his face.  While he offered to change direction / to turn back and not go to meet King Balak, the angel affirmed God’s earlier instruction, “And the angel of the Lord said to Balaam, “Go with the men, but speak only the word I tell you (Numbers 22:35).  So far so good, Balaam is still getting what he wants!

When we get to Numbers 23, Balaam has King Balak set up alters and offer sacrifices to God. But the outcome was not a curse on the Israelites like King Balak requested.  Rather, having to speak the words God instructed, Balaam blessed the people of Israel.  Four times King Balak requested a curse and received a blessing in return.  By the end of Numbers 24, Balaam and Balak part ways.

This story is hard to follow. I’ll admit, a talking donkey is kind of weird and somewhat entertaining, but what is God teaching us with this story?  Remember – All Scripture is breathed out by God and profitable for teaching, for reproof, for correction, and for training in righteousness, that the man of God may be complete, equipped for every good work (2 Timothy 3:16-17).  A few key lessons to consider:

This last key lesson is where I think the rubber meets the road for many of us.  Remember, God’s plan for salvation requires us to take action. …if you confess with your mouth that Jesus is Lord and believe in your heart that God raised him from the dead, you will be saved. For with the heart one believes and is justified, and with the mouth one confesses and is saved, (Romans 10:9-10). It isn’t enough to be a good person, to go to Church, to say the right things, to “hang out” with God and to sound godly.  God requires more. He has told you, O man, what is good; and what does the Lord require of you but to do justice, and to love kindness, and to walk humbly with your God (Micah 6:8-11).