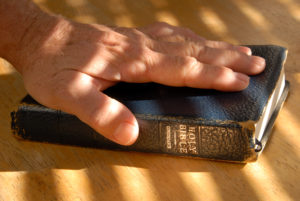 According to Wikipedia, this term can be used to describe a positive situation, such as a time when new evidence has come to light and the accuracy of the historical record is improved. Or it can describe a negative situation, a time when the historical record is distorted so that certain events appear in a more or less favorable light; changing the facts of the situation to support whatever case you are trying to make.

I had never heard this term until a few years ago when a co-worker of mine used it. In the context of a performance review for one of HIS direct reports who was making the facts sound better than they actually were, the word made me snicker.  Unfortunately over time, I found myself using the term more and more to describe some unhealthy behaviors regularly occurring on our team. A lot of needless time was being spent gathering evidence to either prove or disprove assertions made in our office.  In a society that puts incredible value on being the best in class, I wasn’t surprised by the behavior, just disappointed.

“And do not take an oath by your head, for you cannot make one hair white or black. Let what you say be simply ‘Yes’ or ‘No’; anything more than this comes from evil” (Matthew 5:36-37).

As I read Matthew 5 this week, I thought about the time I spent with the leadership team I described above. I didn’t snicker this time. Jesus’ teaching here is specific to the use of vows or oaths, but the core message is simply about the goodness of truth telling. He says swearing, or making a vow, that something is true doesn’t make it so.  In the same way, changing the facts of the situation to support your case doesn’t make it reality either.  He goes on to remind his listeners that speaking truth is always the best approach.  The Berean Study Bible says it this way, “Simply let your ‘Yes’ be ‘Yes,’ and your ‘No,’ ‘No.’ Anything more comes from the evil one.”

A consistent truth-teller never needs to say “I promise” or “I swear” to get others to believe him. His reputation speaks for itself.  Other people want to be on his team.

What about you? Are you known as a person of your word? Are you fostering a truth telling environment?