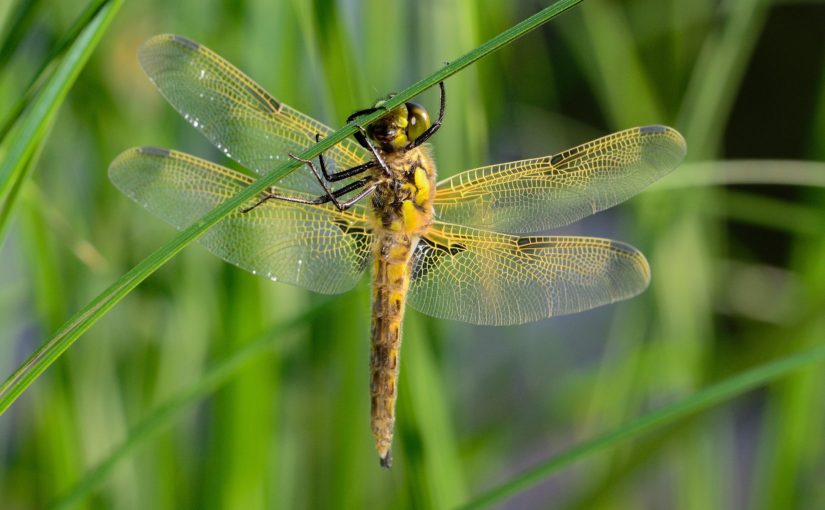 In the faint light of a cool and certain world, three nymphs in a pond clung to a reed. In somber tones they discussed the departure of a friend. Why did he leave us? The young one asked. Seems strange to leave the world we know for one we don’t. I can’t imagine a better life than ours. Why don’t they ever come back?

The elder spoke. No one has ever returned from above, so we don’t know what it’s like. When you look up, all you see is a distant light, a bluish haze at the edge of the void.

As his friends descended back to the mud, the elder remained. The urge drawing him to the surface grew stronger. He began to ascend the reed, slowly towards the light. Eventually he broke the surface into the blinding sun. Groggy from the climb he stopped near the top of the reed and fell into a deep sleep.

When he awakened he felt he couldn’t breathe. The shell that had protected him for so long had become too small. Then just as it was squeezing the life from him, unexpectedly the center of his back cracked open and four wet gossamer wings emerged, unfolding majestically into the warmth of the sun. Then his body, with unforeseen skill climbed free from its shell, out into a new world. Soon the wings dried off as his eyes adjusted to a new world, unimagined — a world of dazzling colors and strange new shapes.

Then, as if he had always done it; his wings began to move at an incredible speed, alive with power, effortlessly lifting off the reed he flew. He hovered and darted back and forth across the surface of the pond, wondering about his friends below. This was what he was meant to be. To soar in the light above and begin his true life.

And we all, who with unveiled faces contemplate the Lord’s glory, are being transformed into his image with ever-increasing glory, which comes from the Lord, who is the Spirit. -2 Corinthians 3:18

The life of a Christ follower, if it is anything, is a life of transformation through faith in action. Spiritual formation is the process of Christ’s likeness forming in us — His attributes of unconditional love, sacrifice and righteousness becoming ours. This is the miraculous transformation that we are called to and made for; practical as it is mysterious.

A few years ago I was at the funeral of my brother’s wife’s grandmother, Freda. She had lived the life of a Christ follower. Her funeral was a celebration of her as a beloved child, a young woman, wife, mother, grandmother and great grandmother, now passing into the next realm.

This realm, Christians believe, is an incredible place, found in the fullness of the presence and glory of the living God — for all eternity. Though finer details are subject to speculation, by faith we look forward to an eternity with no tears, in a place filled with the brightest light of truth and love. A realm beyond our wildest imagination.

At the funeral, many of Freda’s family shared fond memories and stories about her abundant love and other-centeredness. Then the Pastor shared a story about the metamorphosis of a Dragonfly. I loved his metaphor and its revelation about the mystery and splendor of eternal life. About an existence we are destined for — one we never fully appreciate in the here-and-now.

When I looked further into this illustration, I found other versions, stories and poems. Perhaps this analogy has been used for centuries to tenderly explain death and offer hope to grieving survivors. For me it was a tale about spiritual transformation and a reference to the great divide between this life and the next.

I find it remarkable that nature offers an abundance of great metaphors amidst the splendor and complexity of God’s creation.  We are so blessed with this revelation. God speaks without words.

The coolest thing about spiritual transformation is that as we grow in Christ, He grows in us. We don’t have to wait for the next life to experience or understand His power. As we change, becoming citizens of another kingdom, we are increasingly given eyes to see and ears to hear. Enabled to understand the truth.

Ours is not a blind faith, it is a faith realized in our daily transformation, as we follow Christ. Eternal life beyond our wildest hope waits for us, but it is only by faith that we truly see beyond the pale.