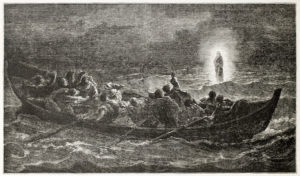 Mark 6 is about believing God.

Verses 1-6 describe how Jesus went back to Nazareth and the people (his family and neighbors) did not believe that He was the Son of God. They knew him as a carpenter, a family member, or a neighbor. They could not figure out where he got all of his wisdom and the power to perform such miracles. Because of the people’s unbelief, Jesus did not perform many miracles in Nazareth.

Verses7-13 Jesus sent out the disciples 2×2 to proclaim the gospel. He sent them together so that they could encourage each other, especially when they faced rejection. He instructed the disciples to “shake off the dust from your feet” when someone rejects what you have to say. This was a sign that they were to remain separate from people who had rejected Jesus and his message. They were only responsible for sharing the message of salvation, they were not responsible for the people who chose not to believe.

Verses 14-29 tells of Herod and his murdering of John the Baptist. Herod did not believe that Jesus was the son of God, but thought that he might be John the Baptist come back to life.

Verses 30-36 The apostles returned to Jesus from their ministry tour and Jesus took them away to rest. They were very excited to share with Him all that took place and about those who made a decision to believe.

Verses 37-44 Jesus asked the disciples to provide food for over 5000 people. They were worried about how much money it would cost to feed so many people. They were given an impossible task, to feed 5000 with only 5 loaves of bread. They did not believe that God would do the impossible.

Verses 45-52 Jesus made the disciples get back in the boat while he went into the hills to pray. Hours later, Jesus saw them struggling to row the boat against the wind. He came to them, walking on the water. The disciples saw him and did not believe it was Him, they thought it was a ghost.

Verses 53-56 The chapter of Mark comes to a close on a positive note. Many people brought the sick to Jesus for healing. These people had faith and believed that Jesus could heal them, and their faith was rewarded. This scene is the opposite to what happened in the beginning of the chapter in Nazareth where very few were healed because the people lacked faith and did not believe.

This chapter is full of beliefs about Jesus, who He is and what He is capable of doing. The people who knew Him the best did not believe that he was the Son of God. He empowered his disciples and sent them out to minister and they did it. They healed and ministered to many, but then did not believe that Jesus could feed 5000 from 5 loaves of bread. Jesus performed a miracle right in front of them for them to witness. Then later that night, the same 12 men were so terrified about the storm that was raging around them, that they thought Jesus was a Ghost. If they would have truly believed that he was God’s Son, they would not have been amazed that Jesus could walk on water. The disciples did not transfer the truth they already knew about Jesus to their own lives.

Do we believe?
We read that Jesus walked on the water, and yet we often marvel that he is able to work in our own life. We must not only believe that these miracles really occurred, but we must also transfer the truth to our own life situations.

I believe that Jesus died on the cross for me and my sins so that I may have life and have it abundantly. (1 Peter 2;24) I believe that He knew me and all the hairs on my head even before I was born! (Luke 12:7)
I believe the Words the Bible says are true! This being said, I find I am much like the disciples here in Mark 6. They knew Jesus, they saw and experienced His teachings and His miracles. And yet, they did did not believe 100%. They did not believe that Jesus would rescue them from the raging storm they were caught in. I also have Jesus’ teachings at my ready and know Him through his Word and have experienced many blessing and even miracles in my life. If I have the Bible as a resource, a personal relationship with Christ, and memories as proof, why, like the disciples, do I doubt and not believe that God has even the smallest details of my life in His hands??
I challenge us all (especially myself) to put these beliefs into practice in every aspect of our lives! He cares for us and wants us to put 100% faith in Him 100% of the time.

This is why…WE BELIEVE…enjoy this song from the Newsboys that reiterates why WE BELIEVE!