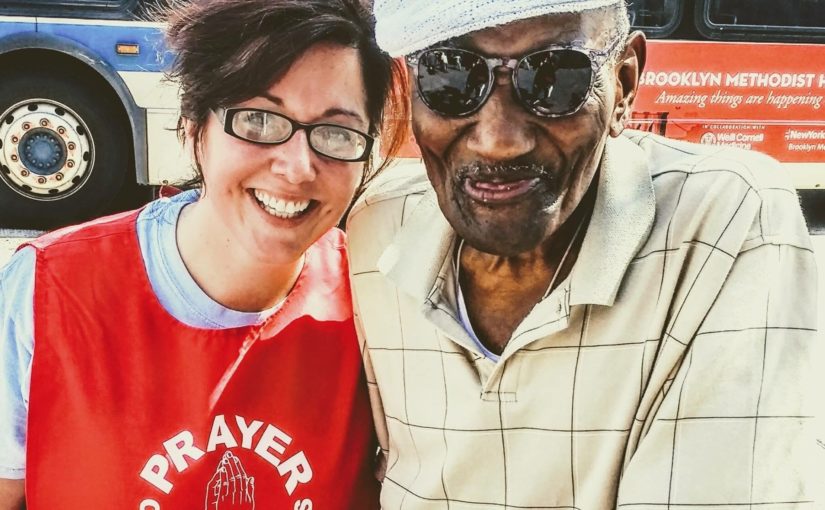 In July of 2017, I had the opportunity to go on a mission trip doing street ministry with Spread Truth. This was something I had never done before and stretched my comfort zone. Our first day was on parks where you are typically approaching people that are seated, and let’s just say the first guy we approached was about as rude and mean as you could be and I thought to myself..”well…it can’t get any worse than that. It can only get better, so let’s move on and go to the next one!” The rest of the day resulted in some great conversations where the Holy Spirit was at work. Day 2 was a different assignment standing on the sidewalks in the streets of Brooklyn as people passed. To say we were off to a rough start was an understatement. For nearly an hour we could not get anyone to even stop to talk to us as they busily hurried to wherever they were headed. We were very discouraged to say the least, and then came a conversation with Thomas King, a name and an interaction I will never forget.

Thomas, who we later would learn was age 93, was standing by a bench, and we approached him to hopefully tell him the Gospel and change his life..instead…he changed ours. He encouraged us immediately and told us to look at the faces of every person that walked by. He said they were all filled with stress, anxiety, and worry…he said, “What they all need is Jesus!” If they would just remember and lean on the words of Isaiah 26:3, they would not be so troubled. He then told us the words of this verse from memory..

“You keep him in perfect peace whose mind is stayed on you, because he trusts in you.”

Not only did this emotional pep talk fire us up like a coach before a big game to remind us that people needed what we had and we had to go back out there and push through the rejection, challenges, and disappointments we had experienced and tell them about what they truly needed….which was Jesus, but it was also a great reminder that fear, anxiety, and stress all come from selfish thoughts and concerns about ourselves. 1 John 4:18 tells us, “There is no fear in love, but perfect love casts out fear.” When we are focused on Him and his perfect love for us given on the cross and we know His love shown in this way means we will spend eternity in Heaven with Him and that is all that really matters, we will be in “perfect peace” as Isaiah 26:3 says.

It’s hard to describe our feelings as Thomas captured our hearts and minds with his words of wisdom. Sadly though, Thomas told us than many younger than him, including his church, did not listen. He told us he was recently recognized by his church for his years of membership there, but they would not give him the opportunity to speak when he asked. This saddened me because not only did it disappoint Thomas, but his words had so much impact on us that we did not want him to stop speaking and others would be missing out on his wisdom. Job 12:12 says, “Wisdom is with the aged, and understanding in length of days.”  How many times do we miss out on the opportunity to learn from our elders by not asking them or not listening to them and discounting their credibility which should be gained, not lost, with age?

Hebrews 13:2 reads, “Do not forget to show hospitality to strangers, for by so doing some people have shown hospitality to angels without knowing it.” I don’t know if Thomas was an angel, but I do know that his words cut sharp like a knife at exactly the right time when we needed it and reminded us that what we were doing was not about us and we needed to re-direct our fear to focus on Jesus and His perfect love which every person who walked by needed. As we head into 2019, we hope and pray that it will bring us many blessings, but it will undoubtedly also will bring us challenges. Let’s commit to being prepared to face those trials because our minds will be fixed on Him and His perfect love, and we will trust in Him which will give us “perfect peace.” We have faith He will give us exactly what we need when we need it..just like He gave us Thomas King.

I live in Bloomington, Illinois with my wife Shannon and 3 young children. I grew up in Central Illinois with Lutheran roots. We moved to the area in 2011 and began attending Eastview Christian Church where I now lead a Small Group. It's been awesome to see God's plan for our lives and our growing thirst for knowledge and closer relationship with Jesus through our move to Bloomington. Professionally, I'm a financial advisor and Managing Director with Northwestern Mutual. View all posts by Chet Bandy